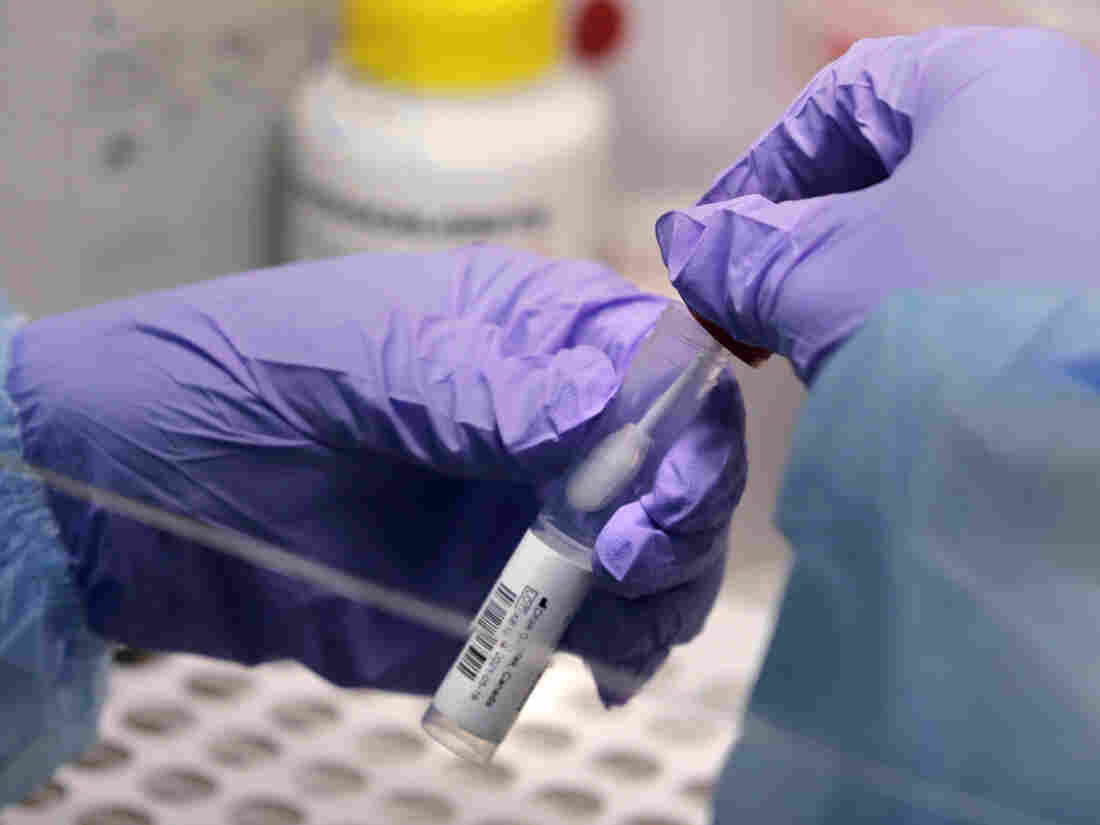 The federal government is giving out funds to develop seven new testing technologies which could increase testing capacity around the U.S. Charles Krupa/AP hide caption

Americans continue to wait in long lines to get tested for the coronavirus. Many then face frustration and anxiety waiting days — sometimes even weeks — to get their results.

Could technology finally solve the testing woes that have hobbled the nation’s ability to fight the pandemic? The National Institutes of Health hopes so.

On Friday, the NIH announced the first seven winners of a competition to produce next-generation coronavirus tests to help battle the spread of COVID-19. Together, they will receive $248.7 million to further develop their tests and hopefully make them available by the fall.

“This is a very substantial investment to try to speed up the availability of COVID-19 testing to try to deal with this pandemic,” NIH Director Francis Collins told reporters during a telebriefing.

One test uses the revolutionary gene-editing technique called CRISPR to spot the coronavirus. Another uses a technique for scanning the genetic code to see if someone is infected. A third uses a hand-held device that produces results within 30 minutes.

Congress gave the NIH $1.5 billion in the spring to jump-start the hunt for technologies that would enable millions of Americans to get easier access to faster, cheaper, accurate tests. The hope is that new tests could allow students, teachers and other workers to get tested frequently to help beat back the pandemic and safely reopen the nation.

“It’s pretty exciting,” said Ashish Jha, who runs the Harvard Global Health Institute, via an email to NPR. “The big question is how quickly can these technologies be scaled up and made available on the front lines … the proof will be in the pudding.”

“All of the products identified through the NIH’s RADx program are exciting in their own right, and I anticipate many will find a place in the market to expand our testing capabilities and help in the fight against COVID-19,” wrote Gary Procop, a professor of pathology at the Cleveland Clinic in an email. Procop chairs the Commission of Science, Technology and Policy for the American Society for Clinical Pathology.

While the first winners appear promising, some observers remain cautious. One of the tests is already on the market and others “may not always be as sensitive” as those already in use, according to Daniel Green, an assistant professor of pathology & cell biology at Columbia University.

“It will be interesting to see how this plays out, and if supply can ever catch up with the soaring demand,” Green wrote in an email to NPR.

The RADx program has received more than 650 applications so far, according to the NIH. About 100 of those went through a one-week “shark tank” evaluation. Thirty-one then progressed through a four- to six-week Phase 1 evaluation.

The seven announced Friday are the first selected to move on Phase 2 of the program, which will involve scaling them up and manufacturing them for use, the NIH says.

“These have now reached the point where we think it’s time to go big,” Collins said.

The seven companies receiving grants are:

– Mammoth Biosciences, Inc., in San Francisco., which uses CRISPR. This technology, best known for editing DNA, can zero in on any spot in a genetic code. In this case, it’s being used to spot the genetic material of the coronavirus.

– Helix OpCo LLC. in San Mateo, Calif., which will bulk ship kits to collect nasal swab samples that can processed within 24 to 48 hours through a combination of automation and “next-generation sequencing,” which has been used in research to scan genomes. Helix expects to process up to 50,000 samples a day by the end of September and 100,000 a day by the end of the year, according to the NIH.

– Fluidigm Corp. in San Francisco, which has developed a test designed to process thousands of samples each day, primarily from saliva. Because the company already has machines in many labs around the country, it should be able to scale up to hundred of thousand of tests per day by the fall, the NIH says.

– Mesa Biotech, Inc. in San Diego, whose test uses a hand-held device and a “compact, single-use cartridge” that can produce results in doctors’ offices, clinics and elsewhere within 30 minutes, the NIH says.

– Quidell Corp. in San Diego already has gotten approval for an antigen test, which detects a protein from the virus instead of genetic material. The test is much simpler and easier to manufacture and use than the genetic tests that have been primarily used so far, and it produces results in 15 minutes.

– Ginkgo Bioworks in Boston is scaling up an automated process for processing tens of thousands of tests simultaneously using next-generation sequencing and delivering results within 24 to 48 hours. The company expects to scale up to 50,00 tests per day in September and 100,000 per day by the end of the year.