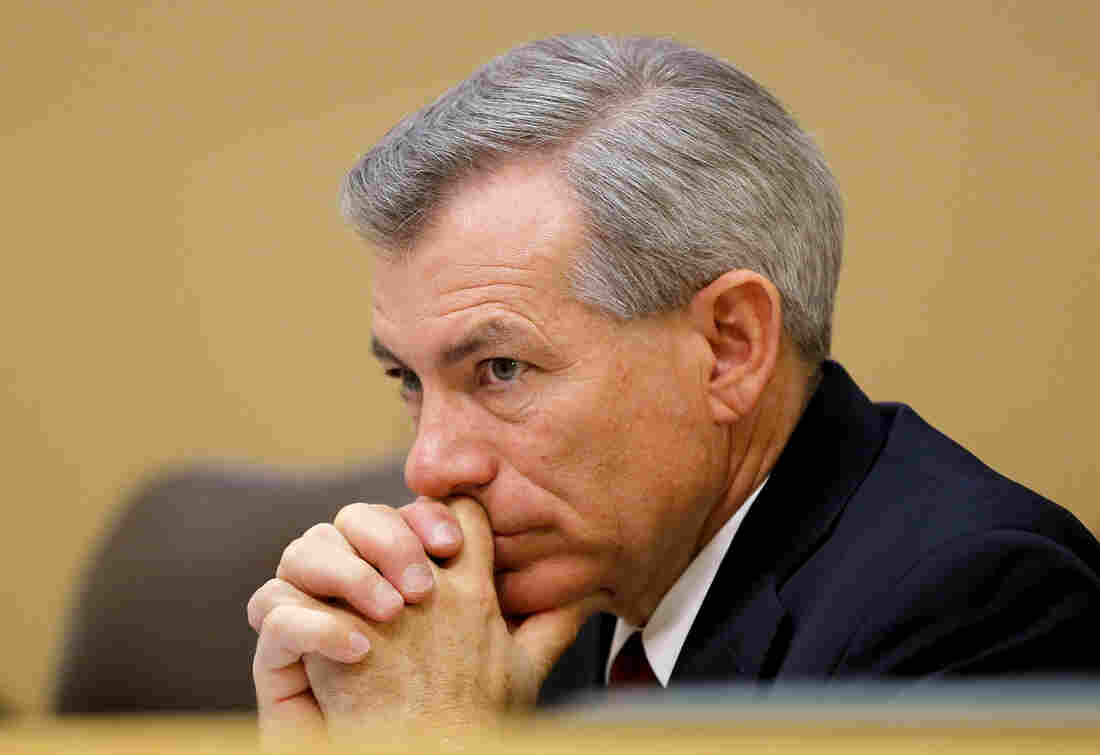 Rep. David Schweikert, R-Ariz., seen here during a hearing in 2013, was ordered by the House Ethics Committee to pay a $50,000 fine for violating ethics rules. Matt York/AP hide caption

Schweikert agreed to pay a $50,000 fine and admitted to 11 ethics violations including the misuse of official funds.

The House Ethics Committee had been investigating Schweikert, who was elected in 2010, for more than two years. Its investigative subcommittee concluded there was “substantial reason” to believe Schweikert violated the government code of ethics, campaign finance laws, and House rules.

House investigators concluded that over a seven year period, Schweikert failed to disclose, or falsely disclosed, $305,000 in loans or loan repayments and failed to report more than $140,000 in campaign contributions.

A 13-page report detailing the committee’s investigation and findings points to Schweikert’s campaign accepting over $270,000 from his then-chief of staff, Richard Schwab, which is a violation of campaign finance laws.

A statement issued on Thursday by the Ethics Committee also said Schweikert had misused his congressional allowance for “unofficial purposes” and pressured “official staff to perform campaign work.”

The findings say Schweikert made “vague or misleading comments” that “allowed him to evade the statue of limitations for the most egregious violations of campaign finance laws.”

Continued the report: “Efforts like the ones Rep. Schweikert undertook to delay and impede the [investigative subcommittee] investigation were not only highly detrimental to the committee’s work and reputation of the House, they were themselves sanctionable misconduct.”

Rep faulted over breach of trust

“One of our most basic obligations as members of Congress is to adhere to the principle that public office is a public trust. To uphold that trust, and to maintain civic confidence in the integrity of this body, we as members have bound ourselves by certain standards of official conduct,” he said.

Deutch went on to encourage congressional members and staff to approach the committee if they have ethics questions to “avoid the mistakes like those made by Rep. Schweikert.”

“The committee’s nonpartisan advisory staff is always available to answer any ethics related questions, to hold special training sessions for members and employees in addition to the mandated annual ethics trainings and to issue advisory opinions upon request,” he said.

Schweikert filed a response to the committee saying that while he thought he could refute some allegations, he decided to settle because the process “was time consuming and extremely costly.”

The House reprimand is a major blow to Schweikert, who faces a tough race in Arizona’s competitive 6th district, which spans Phoenix and Scottsdale.

Four Democrats will face off in an Aug. 4 primary.